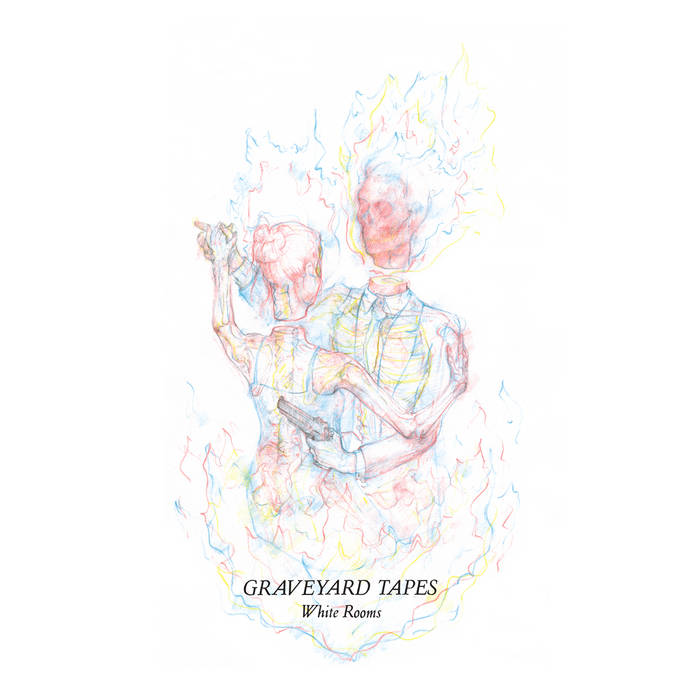 "It is its own thing, completely mesmerizing. Graveyard Tapes have found their true voice in 'White Rooms'." - Popmatters

"Influences such as Radiohead and Atlas Sound creep into the music, but Graveyard Tapes have their own unreachable crypt. It wakes from combat, ready for a new day." - Fluid Radio

"8/10 Stars - An excellent work that marks this classic music." - Son of Marketing

"Tension between traditional melody and found sound based musical backing, which always threatens to open out into rock climax but, most satisfyingly, never does, is excellent." - Cyclic Defrost

"Everything seems to be exactly in the place that it’s supposed to be, and that sort of confidence that makes the music so rewarding. It’s highly recommended for fans of Amnesiac-era Radiohead, Atlas Sound, and Neon Golden-era The Notwist." - Perfect Midnight World

"Like a subdued and shadow hugging Battles" - Mark Loses Today

Graveyard Tapes - 'White Rooms', the follow-up to their acclaimed debut. Edinburgh based duo Euan McMeeken (glacis, The Kays Lavelle) and Matthew Collings (Splintered Instruments, Sketches For Albinos) joined the Tribe in 2013 with 'Our Sound Is Our Wound'.

Only the simplest and most elegant of ideas offer this sort of combustive force. McMeeken builds the audio structures and Collings nearly tears them back down again. Of their debut, Textura lauded “McMeeken's heartfelt singing and piano playing and Collings’ electronic and guitar colourations,” while Incendiary Magazine declared the album “a rare blend of inquisitive dark pop.” The track “Bloodbridge” inspired and was featured in Matty Ross’s enigmatic short film.

Where 'Our Sound Is Our Wound' confronted heartbreak, solitude and death, White Rooms looks to progress, even repair, restore. Collings assumed the role of primary songwriter, and here the darkly lit, fully curtained spaces of their inaugural record serve not as a wake, but a wake-up call. As McMeeken writes, 'White Rooms' accepts "the difficult
but essential challenge of finding the incongruent beauty in loss and moving forward as people.” This way the curtains are thrown open, daylight floods in, the colors of the interior come into full view, and we realize that what is left is a blank canvas, ready for our paints.

Both Collings and McMeeken have long embraced collaboration in their solo careers, having worked with the likes of Ben Frost, Old Earth, and Dag Rosenqvist (Jasper TX). This time around they’ve given their collaborative natures ample room to breathe. Many tracks were improvised with Ben Chatwin, who records as Talvihorros, while the song “Flicker” finds omni-instrumentalist/ singer-songwriter William Ryan Fritch (Vieo Abiungo, Death Blues Ensemble) lending his cello.

'White Rooms' releases mere months after Collings delivered his stunning 2nd solo album 'Silence Is A Rhythm Too', further solidifying his position as one of the most innovative and exciting producers around. It’s an addictive combo when paired with the searing and iconic vocals of McMeeken. It is clear from the initial moments: this incarnation of Graveyard Tapes digs ever deeper.

Bandcamp Daily  your guide to the world of Bandcamp